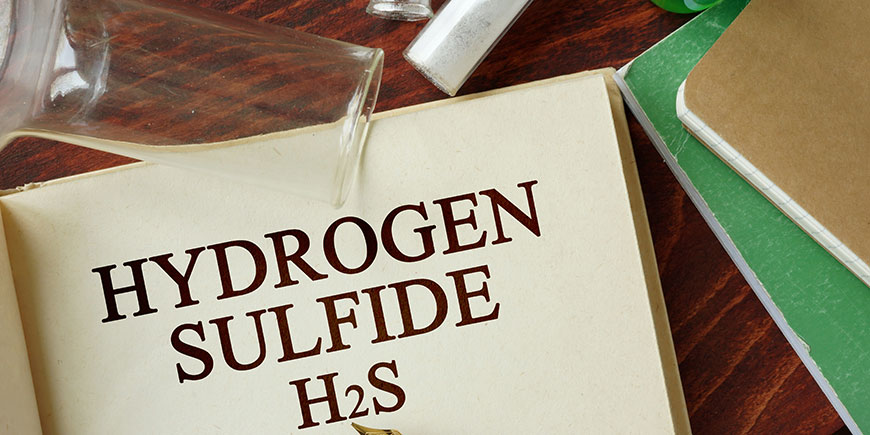 Hydrogen Sulfide (H2S) is a colorless gas known for its strong “rotten egg” odor at low concentrations. It is highly flammable, highly toxic and corrosive to certain metals.

Hydrogen sulfide occurs naturally in sewers, salt mines, well water, oil and gas wells, and confined spaces. Because it is heavier than air, hydrogen sulfide has the tendency to collect in low-lying and enclosed spaces. Its presence makes work in confined spaces potentially very dangerous if proper work procedures are not established and followed.

The health effects of hydrogen sulfide depend on how much H2S a worker breathes in and how long they are exposed to the gas. However, many effects are seen even at low concentration. Effects range from mild headaches or eye irritation, to unconsciousness and death.

When a person breathes in Hydrogen Sulfide the chemical compound then goes directly through the lungs and into the bloodstream. To protect itself, the body oxidizes (breaks down) the chemical compound as rapidly as possible into a harmless compound. Between 300–350 ppm, the oxidative enzymes become overwhelmed.

If the individual breathes in so much Hydrogen Sulfide that the body cannot oxidize all of it, the chemical compound builds up in the blood and the individual becomes poisoned. H2S attacks the central nervous system and paralyses the phrenic nerve controlling the diaphragm, breathing stops and the individual is suffocated.

Some workers who have been exposed to high Hydrogen Sulfide concentration have experienced headaches, poor attention span, impaired memory and motor function abilities after waking up. Problems with the cardiovascular system have also been reported at exposures above OSHA’s permissible exposure limits (PEL).

This course is designed for delegates who may be exposed to Hydrogen Sulfide (H2S) in their workplace environment. This course helps to fulfill the requirements of OSHA 29 CFR 1910 and 1926, ANSI Z390.
6 - 8 hours – length shall vary depending on the class size
This course addresses accepted safety practices for employees who are at risk of potential occupational exposure to hydrogen sulfide (H2S). Course content includes, but is not limited to, the following minimum information content: • Properties and Sources of H2S • Affects on Human Body • Exposure Signs & Symptoms • Respiratory Protection • Detection Methods • Types of PPE • Use And Care of PPE • Rescue Procedures • Exercises and Contingency Planning
None
Any worker who encounters Hydrogen Sulfide
Revalidation every 3 years
• Regulations
• Common Sources of H2S
• H2S and Its Effects on Humans
• Working Safely in H2S Environments
• What is Hydrogen Sulfide
• H2S Properties
• Where is H2S Found
• Incompatibilities & Reactivity
• Why is Important To Learn About H2S
• Respiratory System
• How is H2S Measured
• Exposure Signs & Symptoms
• Respiratory Protection
• Personal Protective Equipment (PPE)
• Methods of Detection
• Safe Work Practices
• Rescue Procedures
• Contingency Planning
Photographic ID